"The End of the Chinese Dream still ranks as one of the works on the Chinese dream most worth reading…..This timely and controversial book is crucial to understand the dark sides of the Chinese dream, and for the development of future research.... This book should be required reading for serious social policy makers, scholars and students who are interested in social policy in China." Kai Chen, Zhejiang University, China

"The End of the Chinese Dream challenges everything we believe about China. This is a book that must be read by anyone who struggles to understand the greatest experiment underway in the world today." John Gray, Emeritus Professor of European Thought, London School of Economics, and author of False Dawn: The Delusions of Global Capitalism


"The End of the Chinese Dream is highly original and unusual. Gerard Lemos has written with real insight into the fears and dreams of ordinary Chinese people. Anyone who wants to get behind misleading headlines about China should read this important book." Zhou Xun, Department of History, University of Hong Kong


"Those looking for a meaningful yet concise interpretation of Chinese history, paired with original and revealing insight on the country’s social state, will find a good read in The End of the Chinese Dream. The book’s anecdotes will entertain even the most avid China watchers. The author does an excellent job in summing up the most palpable evidence that not all is well in the People’s Republic." China Economic Review


"A fascinating in­sight into the people’s hopes and fears….The Chinese government should be grateful for Lemos’s work because it tells them what their corrupt local officials per­haps do not…This is, therefore, an important contribution to an­swering one of the great 21st-century ques­tions: How will China’s leaders deal with the universality of human hope?” Humphrey Hawksley, BBC Foreign Correspondent, Global Briefing


"Lemos lifts the lid on systemic social problems: lack of healthcare; a broken education system, distorted family structures due to the one child policy and no recourse for those whose property is seized by the state" Leslie Hook, Financial Times


"The End of the Chinese Dream shows what can be discovered despite official obstruction...Lemos’s snapshots reveal people traumatised by rapid change and the loss of community and family ties, deeply anxious about the insecurities of old age and resentful of flourishing corruption and ineffective justice." Isabel Hilton, New Statesman


"Lemos shows, with the weight of [his] impressive research, why the China of today cannot yet lay claim to [being] an exemplar for the rest of the world, and a real challenge to the United States." Rana Mitter, Daily Telegraph


"Lemos has a fine eye for detail...for the uninitiated eager to look beyond the veneer of China’s glitzy coastal cities and official propaganda, Lemos’s book is an excellent primer" Frederik Balfour, Bloomberg


"Lemos found that beneath the myth of a harmonious society most of these people were living in constant social and financial anxiety…All the problems listed in the book are true and well documented." Chow Chung-yan, South China Morning Post


"The End of the Chinese Dream is a much-needed and remarkably well-timed glimpse into the underbelly of this Asian tiger, one that reveals the terrible burdens of a growing wealth gap, rising prices, decaying communities, and weakened social safety nets. Lemos offers a view of China outside the glamorous city centers of Beijing and Shanghai, telling the stories that censors keep away from international eyes." Gordon Cain, The New Republic


"This is a welcome and highly readable account of the travails wrought on China's people by history's most powerful plutocracy." Frank Dikotter, University of Hong Kong, author of Mao’s Great Famine, the Sunday Times


"Given the number of books on China that are out there already, it is probably reasonable to ask whether we need any more…The End of the Chinese Dream suggests that the answer is “yes”…Lemos’ work helps us remember why it is that China faces as many as 180,000 protests annually and why it is that Chinese leaders spend so much time talking about the need for grassroots reform." Elizabeth Economy, Council on Foreign Relations

rthk.hk (audio) - Money for Nothing

In the early twenty-first century, China is undergoing a historic trans­formation. The 'Chinese dream', which emerged as the times required, has also undergone change. What is the Chinese dream? Is it attainable? What are ordinary Chinese people's expectations for the future? Differ­ent people have different views. The End of the Chinese Dream by Gerard Lemos concerns ordinary Chinese people in Chongqing and Beijing, and gives thought-provoking answers to these questions.


As a senior scholar in social policy, Lemos was the former chairman of the board of the British Council (2008-2010). In this thought-provok­ing book, Lemos develops a creative field survey approach called 'wish tree'. From 2006 to 2010, as a visiting professor at Chongqing Technol­ogy and Business University, Lemos conducted an independent survey of Chongqing and Beijing residents in selected neighbourhoods. In specified public places, Chinese residents pasted postcards with a leaf design on the wish tree. Each postcard had four questions: Who are you? What event changed your life? What is your biggest worry? What do you wish for? In contrast to straightforward questionnaires, the unique approach of the wish tree succeeded at collecting 'large amounts of reli­able information' and exploring ordinary Chinese citizens' concerns and expectations for the future (p. 15).

Posted by Gerard Lemos at 03:29 No comments:

The End of the Chinese Dream
by Gerard Lemos

As China charges headlong into the modern world it is hard to know what its people think about their new lives. This is a problem for their leaders. Without the democratic feedback mechanisms that we take for granted in the west—free elections, relatively free media and rule of law/separation of powers—how do they know how to steer the ship of state to deliver enough of what people want to justify the party’s continuing monopoly on political power?

Actually, they are getting better at listening, as I discovered on my first trip to China at the end of last year. I spent (thanks to the Institute for Strategic Dialogue) a week with a group of journalists in the old capital city of Nanjing, now a would-be mega city of 8m. It looks, at least in the centre, much like a western city, a city—like other rich parts of China—that has exchanged the bicycle for the Lexus in a generation, without bothering with a Trabant stage.

Read more
Posted by Gerard Lemos at 08:25 No comments:

Gerard Lemos, The End of the Chinese Dream: Why Chinese people fear the future

China is changing very fast. There is no doubt about that. Nearly 350 million Chinese are expected to migrate to the cities before 2030. To cope with that transformation, China will have to build more than 50,000 new high-rise buildings, and 170 cities will need new mass transit systems. Road network, highways, railways, and airports will have to expand 60 percent by 2030 (p. 185).

Comprehending the desires of the Chinese people facing this rapidly moving future is a tremendous challenge. In this effort, the very original survey presented by Gerard Lemos in this book is surely worth mentioning.

Posted by Gerard Lemos at 09:19 No comments:

Monday, February 18, 2013 -- 9:57 am
Economist Gerard Lemos gives readers a glimpse of ordinary Chinese lives that are anything but ideal
﻿

In 2007, residents in three Chongqing communities were invited to do something they had never done before. A small team of researchers from Chongqing Technology and Business University asked them to jot down their deepest hopes and fears on index cards. In a few sentences a piece, the nearly 1,500 respondents, many of them recent transplants from the countryside, painted a disturbing picture of everyday life in urban China.

The informal survey, led by British economist Gerard Lemos, showed these communities to be on the verge of crises in health care, employment and education, with little promise of relief from those woes in the future. Both young and old were wracked with anxiety.

In "The End of the Chinese Dream: Why Chinese People Fear the Future," Lemos documents the research experiment he conducted as a visiting professor in the southwestern Chinese city. Responses to the four mild questions posed in the survey revealed what Lemos regards as the honest, underlying apprehensions of contemporary Chinese society – and dark ones at that. The author goes beyond simple analysis of the data and ties this current of unease with the tumultuous economic history and political chaos of the past century.

Gerard Lemos’s book on China begins on a London housing estate and ends with thoughts about the Arab Spring. In between, the author takes us to central China where he sets about assessing the aspirations of the citizens living in and around the megacity of Chongqing.

His findings are made more salient because Chongqing was recently the fiefdom of the fallen politician Bo Xilai, who attempt­ed to mesh the contradictions of consumer society within an au­thoritarian state by reviving op­eras from the Cultural Revolution and the teachings of Mao Zedong.

Fresh from his surveys on the fractious and run-down Aylesbury estate in south-east London, in China Lemos uses a ver­sion of the ancient Chinese Wish Tree where people write down their wishes and tie them to its branches. With a small army of helpers, he devises four ques­tions: Who are you? What event changed your life? What is your biggest worry? What do you wish for?

The answers give us a fascinating in­sight into the people’s hopes and fears: about losing jobs, factories closing, land seizures, growing old, corrupt govern­ment and – most prevalent – about non-existent or unaffordable health care.

Viewpoint: Fear and loneliness in China

What kind of society will China's new leaders inherit? China has developed at unimaginable pace, lifting millions out of poverty. But as part of a series of viewpoints on challenges for China's new leadership, Gerard Lemos, who conducted research in the mega-city of Chongqing, says it is easy to overlook its lonely underbelly.
An old man was hanging upside down in the public square. His feet in traditional cloth shoes were over the parallel bars from which he had suspended himself, for what were presumably his morning exercises. He was fully clothed and in a padded overcoat to combat the spring chill.

I saw this when visiting a factory community in Beijing in 2008. On the face of it, this was a peculiar act to perform in a public space, but people walked past taking no notice. In such traditional Chinese communities, this public square served as a communal living room; most of the people around are friends and neighbours. Not being surprised by the unusual behaviour of your neighbours is an aspect of intimate community life.
But this kind of sight will become rarer as a changing China sees the fragmentation of these communities.

A new book offers a tentative view of the largely uncharted terrain of public opinion in China, writes Kerry Brown 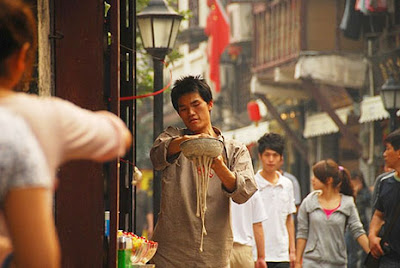 CHONGQING has been in the news lately. From 2007, what’s referred to as the largest city in the world (though this is a bit of a misnomer, as it more resembles a state or a province) was the fiefdom of Bo Xilai, the charismatic, high-profile former trade minister and Politburo member. Bo had been noisily claiming attention since his surprise appointment as party secretary of the southwestern city, which belonged to Sichuan province until 2000. His campaigns to crack down on organised crime and encourage local people to sing songs reminiscent of the Cultural Revolution were interpreted by many, inside and outside China, as a sign that he was lobbying for promotion to the all-powerful Standing Committee of the Politburo at the party congress this year.

Read More - Inside Story - Chinese Whispers
Posted by Gerard Lemos at 04:08 No comments: 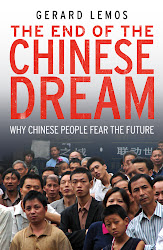